Create an Account - Increase your productivity, customize your experience, and engage in information you care about.

The West Lampeter Township Police Department enforces all violations of the Pennsylvania Crimes Code as well as Township Ordinances. Crimes committed within West Lampeter Township are dispatched through Lancaster Countywide Communications and are responded to and initially investigated by the Patrol Officers of our Department. Most serious crimes, or those requiring extensive investigation and follow-up, are referred to the Detective Division headed by Det. Jere Schuler, a long-time veteran of this agency. If, as first-responder, the Patrol Officer determines additional assistance is needed due to the scope of the crime, the Detective or other specialized unit is dispatched to the scene.  Forensic testing is utilized as an investigative tool to provide as much information and detail as possible in closing each crime by arrest. Responding police personnel are responsible for the investigation and follow-up of each incident through written report with the ultimate goal of bringing each case to a closed status, either by arrest or exceptional means. West Lampeter Township Police Department files a monthly report of crime with the Pennsylvania State Police Uniform Crime Reporting system and the Department of Justice, which reflects consistently high clearance rates of crimes investigated by our Department. Surveillance and undercover operations are conducted by members of the Department during periods of patterned repeat crimes occurring in or near our jurisdictional boundaries. Our officers work closely with the Lancaster County Drug Task Force, The Office of the District Attorney, as well as numerous state and federal agencies in the investigation of high profile cases and drug-related operations connected to our jurisdiction. 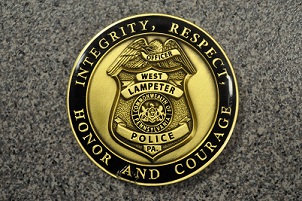